Illustrating Key Concepts in the Bible in Great Detail

by Phil Harris
in Christianity, Graphics
250 2
0

Illustrated with charts. The designing and drawing of the charts and the writing of the descriptive matter took over three years. The book therefore has not been hastily gotten up. It is the outcome of over 30 years of careful and patient study of the Prophetic Scriptures, and aims to give not the opinions of men, but the teaching of the Word of God. The writer’s purpose has been to prepare a standard work on “Dispensational Truth.” That such a work was greatly longed for is evidenced by the reception the book has had. In ten months the first edition was exhausted and was widely circulated all over the world. The first edition was a “feeler” to see whether such a book would be in demand, and so was printed and circulated in the cheapest form. When the Author awoke to the fact that the book was what the “Students of Prophecy” were looking for, he decided to revise and enlarge the book and put it out in a more substantial and usable form, but before he could do this, a second edition was called for and had to be printed in the old form.

This, the Third Edition, has been revised and enlarged by the addition of twice as many charts and twice as much descriptive matter as the previous editions, and the charts are now inserted in the descriptive matter where they belong. The book has also been printed in Atlas form, 11 inches square, and bound in cloth, making it more convenient to handle and carry about. The large charts of the earlier editions have not been reduced in size or form, but are printed from the old plates, and when the book is open, spread across two pages.

This method and manner of printing the book adds greatly to its cost, but the buyer gets far more than the additional cost in the increased value of the contents of the book, which contains twice as much as the previous edition. There are 170 double pages of descriptive matter in the book, or 340 single pages, and as each page contains one-half more matter than the page of and ordinary book, there are the equivalent of 500 pages of an ordinary book.

If the Author had had to employ a skilled draughtsman to draw the charts the cost of the book would have been prohibitive. In fact, the charts could not have been drawn that way, for the draughtsman would have had to have had the Scriptural knowledge of the Author; for the charts had to be thought out and developed under the direction and guidance of the Holy Spirit. In this the Holy Spirit did not confuse the Author by suggesting all the charts at one time. When one was completed another was suggested. And upon more than one occasion when a problem arose the answer was given in the night or at awakening in the morning.

The Author has always deplored the tendency of writers on “Dispensational Truth” to say uncharitable things of each other, and to unfairly present the side of their opponent; he has therefore earnestly and prayerfully sought to avoid any such criticisms and to simply expound the Word of God as the Holy Spirit opened it up to him. He has sought not to be influenced by any religious or doctrinal bias, and with “open mind” to follow the leading of the Holy Spirit, and let the Scriptures say what they was to say. His writings therefore must be judged by their agreement or disagreement with the Holy Scriptures.

With profound gratitude and thankfulness for the blessing of his Heavenly Father upon the previous editions of this work, the Author sends forth this Third Revised and Enlarged Edition, earnestly praying that it may be of untold blessing to thousands of God’s dear children who love the Lord’s Appearing, and be an instrument in the hands of the Holy Spirit for the conversion of the unsaved, and of those who “deceitfully handle” the Word of God.

Above text and much more info on this site : https://www.blueletterbible.org/study/larkin/dt/index.cfm 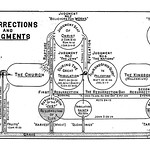 The Celts and the Religion of Magic

Plato's Allegory of the Cave - Image, Info, and PDF

Planetary Magick from the Keys of Solomon – Days, Hours and Virtues of the Planets

The Song of Moses and the Israelites

Plato's Allegory of the Cave - Image, Info, and PDF