No Result
View All Result
Home Articles Astronomy and Astrology

by Phil Harris
in Art, Astronomy and Astrology, Graphics
250 2
0

“The Harmonia Macrocosmica is a star atlas written by Andreas Cellarius and published in 1660 by Johannes Janssonius. The first part of the atlas contains copper plate prints depicting the world systems of Claudius Ptolemy, Nicolaus Copernicus, and Tycho Brahe. At the end are star maps of the classical and further constellations, the latter ones as introduced by Julius Schiller in his Coelum stellatum christianum of 1627.

For its importance in the history of celestial cartography, the Harmonia Macrocosmica is considered as one of the notable masterworks from the Golden Age of Dutch/Netherlandish cartography (c. 1570s–1670s), along with Abraham Ortelius‘s Theatrum Orbis Terrarum and Johannes Blaeu‘s Atlas Maior. It is often described as the most beautiful celestial atlas ever published.” – Wikipedia. https://en.wikipedia.org/wiki/Harmonia_Macrocosmica

Astronomy and mythology made a major comeback during the Renaissance period, and for groups of people like the Royal Society and it’s affiliates, the Rosicrucians, etc. it was a vital part of their cosmologies and every day life. They incorporated them into much of their writings and artworks, and used the knowledge for things like planning voyages, and to help preserve and revive ancient wisdom for future generations. Study the images closely to learn more about the workings of the cosmos, and to find the esoteric symbolism and knowledge encoded into the artwork. 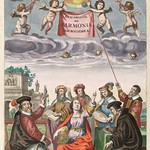 Description of Atlantis and a History of Athens, from Plato’s Timaeus

The Symbols and Constellations of the Sun God Apollo at Delphi, Greece