Splendor Solis (“The Splendour of the Sun”) is a well-known colorful alchemical text. The earliest version, written in Central German, is dated 1532–1535 and is housed at the Kupferstichkabinett Berlin at State Museums in Berlin. It is illuminated on vellum, with decorative borders like a book of hours, beautifully painted and heightened with gold. The later copies in London, Kassel, Paris and Nuremberg are equally fine. In all twenty copies exist worldwide.

The original of Splendor Solis which contained seven chapters appeared in Augsburg. In miniatures the works of Albrecht Dürer, Hans Holbein and Lucas Cranach were used. The author of the manuscript was considered to be a legendary Salomon Trismosin, allegedly the teacher of Paracelsus. The work itself consists of a sequence of 22 elaborate images, set in ornamental borders and niches. The symbolic process shows the classical alchemical death and rebirth of the king, and incorporates a series of seven flasks, each associated with one of the planets. Within the flasks a process is shown involving the transformation of bird and animal symbols into the Queen and King, the white and the red tincture. Although the style of the Splendor Solis illuminations suggest an earlier date, they are quite clearly of the 16th century. – Wikipedia 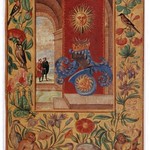