No Result
View All Result
Home Articles Astronomy and Astrology

by Phil Harris
in Astronomy and Astrology, E-Books, Graphics
250 2
0

” Urania’s Mirror ; or, a view of the Heavens is a set of 32 astronomical star chart cards, first published in November 1824. They had illustrations based on Alexander Jamieson‘s A Celestial Atlas, but the addition of holes punched in them allowed them to be held up to a light to see a depiction of the constellation’s stars. They were engraved by Sidney Hall, and were said to be designed by “a lady”, but have since been identified as the work of the Reverend Richard Rouse Bloxam, an assistant master at Rugby School.

The cover of the box-set showed a depiction of Urania, the muse of astronomy, and came with a book entitled A Familiar Treatise on Astronomy… written as an accompaniment. Peter Hingley, the researcher who solved the mystery of who designed the cards a hundred and seventy years after their publication, considered them amongst the most attractive star chart cards of the many produced in the early 19th century.” – Wikipedia 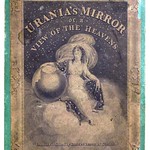 The Symbols and Constellations of the Sun God Apollo at Delphi, Greece